Across the world, Serve the City celebrated World Refugee Day on the 20th of June through various projects, collaborations, and posts.

Serve the City Paris joined the diverse projects on this day through a creative contest for refugees residing in Paris.

We interviewed Maya AlSousli, a member of Serve the City Paris, to hear more about this unique project.

The article shares information about the heart behind the project as well as the winning entries.

What’s your name and role in STC Paris?

My name is Maya AlSousli. I am a PhD student in international law studying at the University of Santiago de Compostela in Spain. I am currently doing an Erasmus for Young Entrepreneurs at Serve the City Paris. Among what I do, I am working on my project “Voices of Refugees and Migrants” – a platform for refugees, asylum seekers and forced migrants to express themselves, show their talents and their skills and want to share with others or teach to them as a way for integration in the society and being active there.

The idea of the project inspired us to launch the contest “Global Refugee Day” to test the idea and to see if there would be an interest among our community of refugees, asylum seekers and forced migrants in Paris.

STCP celebrated World Refugee Day by organizing this contest to show the talents of refugees, asylum seekers, and forced migrants. We saw it as an experiment – a very preliminary pilot for the project. The contest offered refugees, asylum seekers and forced migrants the opportunity to express themselves by showing their talents and skills and offered a symbolic prize for the winners. The contest offered 100 EUR for the first place, a donated gift for second place, and, most importantly, gave visibility of the projects on our social media platforms.

World Refugee Day coincided with an important celebration day in France called “Fete de la Musique” which takes place on the 21st of June.  STCP organized an integration event where STCP volunteers and refugees came together to celebrate World Refugee Day and to listen to live music by an STCP band and a band from Nigeria.

What was the community’s response to the Global Refugee Day contest?

For the short test pilot, we had many interesting participations, which confirms the importance of the project.

Since this was not an artistic contest per se, the criteria that we set related to the honesty and authenticity of the work which most reflects the spirit of the contest and the project.

Our team voted in favor of two of the submitted works. In the first place came the novel “A Cry of Refugee: the Sudanese Refugee” written by Tayib Mohamed Jadah who is a Sudanese refugee in France, the novel touched the heart of our judges. As the author explains: “it is a cry of thousands of Sudanese refugees in Jordan, Egypt, Niger, Chad, Ghana, Italy and France’’.  It speaks about the suffering, the displacement, and the homelessness that they go through, and how their dreams were broken once they reached the “Old continent” as they are surprised by a reality very different from their “pink dreams”.

The second work selected and prized was a short film called “The Pain” by Alireza Kumar, an Irani asylum seeker in Paris. As we asked him to describe his work, he says: “It is about [the] third eye as Sufism says [it] can release your soul and spiritualty idea… how human was created and gained big pain in life and the apple which is the story of Adam the first prophet.”

Both winners Altaib Mohamed and Alireza Kumar are professionals in their fields, so it was a great opportunity to give visibility to their works. The skills and knowledge of many forced migrants are often neglected, undervalued, and lost as no one sees them or hears them as the people they are. They are assigned with one identity called ‘’refugee’’ which often strips them from their individualities in the “masses of refugees and forced migrants” hiding the features of their lives and trajectories – they are objectified and often deprived of expressing themselves in their host communities who don’t bother to hear their deep stories, rich experiences and diverse trajectories of life. As a result, these individual’s emotions and feelings are often turned into frustration, sadness, helplessness, and passiveness.

This contest sought to give them a voice. The project or contest does not adopt an idea or opinion, it only serves as a platform for them to share their voices.

At this stage, we are still working on developing some aspects of the project before launching it officially on a wide level in the next months. 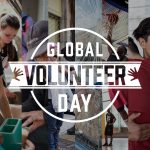 The Honour of Leading VolunteersNews