City Transformation in the Balkans – Kosovo and Albania Update

David Anderson from Serve the City Brussels and Jon Hildebrand from Serve the City Chesapeake recently visited Prishtina, Kosovo and Tirana, Albania. The purpose of the trip was to continue to strengthen the STC network in South East Europe and build bridges between different groups of people through serving.

David and Jon had previously participated in the first STC Kosovo Big Volunteer Week during the summer of 2018. During that week, volunteers from Serve the City in the US partnered with the STC Kosovo team to serve the elderly, children and the poor. Many friendships were established during the trip and the local team has followed up with those served during the last year to strengthen relationships.

In addition to follow up from last year, David and Jon also spent time with STC Kosovo leaders to plan a second Big Volunteer Week this summer. Many connections were made with Kosovar civic leaders who are already serving in the community, as well as possible new opportunities. Finally, David and Jon, together with STC Kosovo leaders traveled to Tirana, Albania to meet with our STC leader there and discuss ways to work together to help and encourage people throughout Balkans.

As people connected to each other during the trip, David and Jon reported that it was a good reminder how we are more similar than different. This is the basis of our motto “We know them by their needs, what if we knew them by their names?” 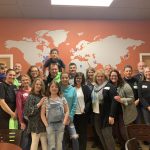 5th Serve the City US ForumNews