‘Hello From The Other Side…’

He was sleeping on hard hewn out logs meant to be a bench, not a bed. It was midmorning in the busy Republic Square where protesters and skateboarders like to gather. I usually will ask a sleeping figure softly and only once, “A coffee, a tea, something to eat sir?” He woke up with a start and said softly, “Yes, a coffee, please!” He didn’t look disheveled or intoxicated like so many people living rough. His shoes were the kind you might see going to work in an office. Black pants, black shirt.

“What is your name,” I asked?
“It’s Adel, like the singer.”
“Oh Abdel,” I said, still experiencing hearing challenges from brain surgery.
“No, Adel, like the British singer!”
I began to sing, “Hello from the other side…” A smile, a connection.
“Where are you from Adel?” Tunisia. I smiled and asked how he was in Arabic, Tunisian style, “Lebez?” Are you okay?

As we chatted I found out a few things from this not so likely homeless man. 1. He used to work as a DJ. 2. Covid took away his work. 3. His brother was a doctor in Tunisia. 4. He was on the street for just 4 months, where his belongings, including his phone, were stolen by other homeless people. 5. He was thankful for a little conversation and even thanked us over and over.

How I wished I could have given more things besides just a sandwich, coffee, and a toothbrush! He was so grateful. I asked if I could immortalize our visit with a photo. Afterward, as we were leaving he gave me a kiss on both cheeks. Then I looked back once more after walking about 10 meters and he was still looking our way, he waved with a smile, a kindness shared between humans. 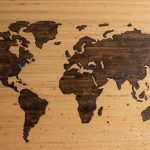